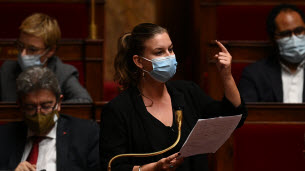 The LREM MP from Vendée Pierre Henriet, who had dealt with the Insoumise Mathilde Panot from the “fishmonger” in the semicircle, was fined, decided the President of the National Assembly, Richard Ferrand.

At the Conference of Presidents of the Political Groups, Richard Ferrand (LREM) stated that he had “requested” a “call for appointment with an entry in the Minutes” from Pierre Henriet, that is, the withdrawal for a month of a quarter of Parliament’s allowance attributed to the deputy. Or 1405 euros.

“This is one of the rare times in our history when the National Assembly condemns one of its members for sexist insults. This is a big step forward. Let’s not let anything go by,” said the member for France Insoumise.

She had apologized and after being insulted on February 2nd said in a semicircle: “It is not a personal question. It is our institution that must not let go of this. There are too many people. Sexism in the National Assembly.”

“There is no saint or martyr at the table,” stressed the President of the meeting, in the presence of Mathilde Panot, and condemned the “language leaks” on numerous occasions by MPs from several groups from the beginning, “including the rebels.

The owner of the perch has made a number of offensive remarks since 2017, such as a “facho” that the communist Stéphane Peu to the unregistered near the RN Emmanuelle Ménard, a “sale” published by the LR Fabien Di Filippo, ins The ex-Prime Minister Edouard Philippe or even a “dwarf” addressed by Jean-Luc Mélenchon to the Interior Minister Gerald Darmanin and the Deputy Minister Marlène Schiappa were called to life by a “machine” Schiappa.

Richard Ferrand also quoted a “slip” by Mathilde Panot on the social network Twitter “when she mentioned” La Macronie recycling its waste “on the occasion of the election of Christophe Castaner to head the group La République in Market.

“It is immature and hypocritical to claim victim status when you are used to the attack yourself,” Richard Ferrand reportedly said.