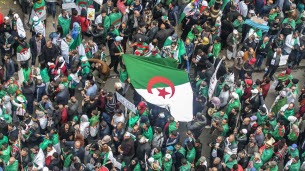 Algerian President Abdemadjid Tebboune on Thursday evening promised to release dozen of prisoners of conscience and decided to dissolve parliament and call for early general elections.

“The ‘blessed Hirak’ saved Algeria. I have decided to grant a presidential pardon to about thirty people for whom a court decision has been made and others for whom no judgment has been made. From 55 to 60 people will be join their families. ” tomorrow, “he said in a televised address to the nation.

According to the National Committee for Prisoner Liberation (CNLD), a support group, there are currently around 70 people in prison related to Hirak and / or individual freedoms.

The announcement comes on the eve of the 2nd anniversary of the unprecedented popular uprising that forced ex-strongman Abdelaziz Bouteflika to forego a fifth presidential term and step down.

President Tebboune also decided to “dissolve the National People’s Assembly (APN) to call for elections” and said he would “open its doors to the youth”. The parliamentary elections planned for 2022 are expected to take place at the end of the year.

The head of state also announced a cabinet reshuffle “within 48 hours at the most”. “This reshuffle will affect sectors that have deficiencies in their management that are felt by citizens and ourselves,” he said.

Mr Tebboune returned from Germany a week ago, where he was being treated for postcovider complications, and has since held consultations with six political parties, including opposition formations.