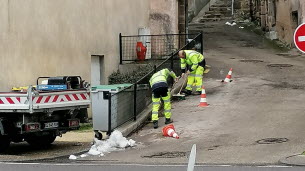 Rue Pipet is perpendicular to RD1082. It starts at the beginning of rue Cardinal-Donnet, in an uphill section that gives access to the stairs of the Saint-Chamond climb and gives access to the urban school group. It is then extended by a flat part parallel to Place d’Armeville.

Rue Pipet is a one-way street through which vehicles departing from the Cotaviol district via the ascent of Cotaviol get into the city center.

Due to its location near shops, vehicles often stand in the lower part of the street blocking the passage. For this reason, four metal cones were placed 1.10 meters from the parapet in a particularly narrow place in order to avoid uncomfortable parking. These pins are detachable with a key system so that they can be removed in order to possibly pass a large vehicle, for example a truck, during road works.