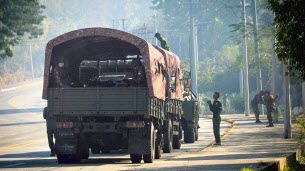 Aung San Suu Kyi’s party on Tuesday called for the immediate “release” of the ex-leader and other leaders of the movement who were arrested in a military coup in Burma on Monday.

“Release all detainees, including the President (Win Myint) and the State Council (Suu Kyi),” the National League for Democracy wrote on its Facebook page. This coup is “a mark in the history of the state and of Tatmadaw,” the Burmese army.

Aung San Suu Kyi would be under house arrest at her home in the capital, Naypyidaw, according to a representative of her education.

A meeting of the UN Security Council this Tuesday

In the parliamentary elections in November, the military declared a state of emergency for a year on Monday, abruptly ending a ten-year democratic bracket.

They arrested 75-year-old Aung San Suu Kyi and other leaders of her party, the National League for Democracy (NLD), just before the first session of parliament.

This coup has been condemned by a number of states, with Washington threatened sanctions, and an emergency UN Security Council meeting will be held on Tuesday.

“Free” elections in a year?

In order to justify their coup, the military assured that the November parliamentary elections, largely won by the NLD, were marred by “enormous irregularities” which the electoral commission denies.

The army has promised to hold new “free and fair” elections after the one year state of emergency is lifted, but the Burmese have been pessimistic.