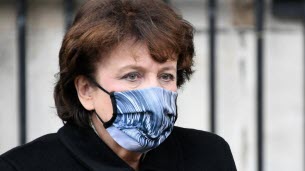 Culture Minister Roselyne Bachelot does not want to sanction the head of the CNC, who has been accused of sexual assault, in the name of the presumption of innocence and believes that it is up to him to judge whether he can exercise his functions “calmly”.

“On behalf of what would I sanction Dominique Boutonnat? It is up to him to see if he can carry out his mandate with confidence, he will judge and he will decide. It is not my job to sanction anyone. One who is considered innocent, “said the minister on Monday evening at the LCI.

“The judgment will not be passed”

For Roselyne Bachelot, “the court of public opinion cannot replace the court”.

Unions called for his resignation

Shortly after Dominique Boutonnat was charged with sexual assault and attempted rape last week, unions called for producers, directors and the CGT spectacle to remove the head of the CNC and appoint a new presidency.

Dominique Boutonnat formally denies the allegations of his 22-year-old godson, the son of a long-time friend, because of facts that the complainant dates back to August 2020.

The 51-year-old film producer Dominique Boutonnat has been President of the National Center for Cinema and Animated Images (CNC) since July 2019.