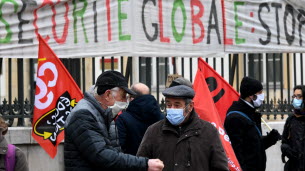 After the demonstration on January 16, the Collectif Non Loi Sécurité Globale de l’Ain is calling for the demonstration again on Saturday, January 30 at 3 p.m. in Bourg-en-Bresse. He calls for the withdrawal of a law that he sees as a “violation of individual or collective freedoms”.

The collective denounces “Article 21, which extends the conditions for the police to use pedestrian cameras”. He believes that Article 22 (use of drones) “would allow facial recognition that is a threat to democracy” and that Article 24 “would allow police violence to be covered”.

The collective also calls for the withdrawal of the National Law Enforcement System (SNMO), which it believes “advocates law enforcement practices that have injured thousands and mutilated around thirty protesters. The diagram also takes into account that journalists or observers are committing a crime by staying present after the subpoena, preventing them from carrying out their missions. “”