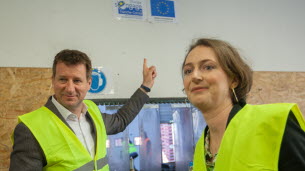 The vocabulary used during the press video conference by Stéphanie Modde, head of the Ecologists and Solidarity List on Monday 15th February, is clear. They alone, they assure, offer an “alternative” in the face of “climate, health and social crises”, are “ready to build the world afterwards”, that of “resilience”. The others “seem unable to take action”, caught up in the “at the same time,” busy doing “a little of it, a little of it”. It is necessary that “the environment and solidarity project can continue”. Stéphanie Modde’s list “is best suited to keep the region open to environmentalists and left-wingers”. But it is “ready” to take those who recognize themselves in their creed and accept the new paradigm, says Claire Mallard, EELV regional secretary in Burgundy and director of the Saône-et-Loire file.

Marie-Guite Dufay and her outgoing majority are certainly not overwhelmed by all the evils. “Interesting things were done,” admits Stéphanie Modde. “Can do better”, would have summarized a teacher of the schools. Without the term of office that is coming to an end, despite having sat in Franche-Comté continuously since 2004 and Raymond Forni’s desire to make them his privileged allies, a strategy pursued by the current president after her death, the ecologists reject this off. the mistake in their spread from back then. But even united, the 6.06% of the cumulative votes of EELV in December 2015, which at that time were associated with the Movement for Independent Ecologists by Antoine Waechter and the Alliance for Independent Ecologists by Jean-Marc Governatori, would have put them way behind the top left three lists behind. Even adding the unrated score from Cap-21, Corinne Lepage’s movement that was on Marie-Guite Dufay’s list at the time.

In 2017 the “world before” imploded. The climate and the social emergency have moved public opinion. “It’s now or never!” Judged the head of the list. “Stéphanie Modde is perhaps little known […] but it deserves to be known ”, said Julien Bayou, National Secretary of EELV, curiously. “She will be a good regional president and that is the goal,” he continued. In Franche-Comté, the guides will be Anna Maillard in the Doubs, Marie-Claire Thomas in the Haute-Saône, Eric Oternaud in the Territoire de Belfort and Pascal Blain in the Jura. Like their Burgundian colleagues, they embody “ecology in all its diversity and history. If they subscribe to the Pole’s call for ecologists, the other left parties are welcome. But there is no question about waiting for the result of “the other’s procrastination” to go into the campaign. “We are open to discussions”, “nothing is set in stone”, “the door stays open”, let go of Stéphanie Modde one after the other. When she listened to him, she looked pretty ajar.