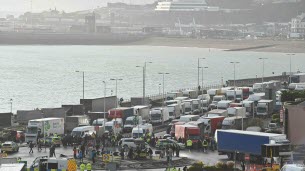 “The apparent unpreparedness” of Brexit by the British poses “real risks” to cross-channel traffic management in the coming weeks, the Prefect of the North warns in a letter to Prime Minister Jean Castex, as he notes ongoing progress.

“The technical conversion of the United Kingdom to third country status is technically successful on the French side, but an apparent lack of preparation is being fished for on the British side,” regrets the Prefect of the Defense and Security Zone North, Michel Lalande, in this letter dated January 14, which takes stock of the consequences of Brexit two weeks after it came into force.

This situation poses “real risks in the event of resumption of activity” while heavy goods traffic between the UK and France is picking up very quietly after the beginning of January.

“The low volume of traffic, the relative lack of goods transported for import, but also the initial flexibility of the state services in formal controls obscure the nevertheless very real difficulties,” said the storage parking spaces in the port of Calais and in The exit of the Channel Tunnel has already been several times satisfied, Mr. Lalande worries.

He points out that many heavy-duty vehicles remain blocked there because of “disproportionate delays”, sometimes longer than 60 hours.

One of the problems raised is the fact that “the health certificates filled in by the UK authorities are incomplete and unsatisfactory, with the result that many heavy goods vehicles are disembarking in France while the lack of this formality cannot be resolved”.

Another problem that weakens the “smart border” system that must allow documents to be checked during transit is that agents of transport companies often scan the wrong documents.

They drive to French parking lots where heavy duty vehicles are stored, 50% of which must be regulated by trucks that shouldn’t be there.

An improvement in spite of everything

Mr Lalande recalled the “constant dialogue between the French and British services” in the face of these difficulties and said that the situation had improved since the beginning of the week, in particular due to tightening controls on the French side.

If 30 heavy goods vehicles had been escorted across the canal on Tuesday the 12th due to a lack of formalities, there would be no more trucks without a health certificate to regret on Wednesday as the transport companies would have “fully assumed their responsibility,” he wrote.

In his letter, the Prefect also drew attention to the continued concern in the French fisheries sector and it was taking some time to clarify the conditions for the application of the cooperation agreement. He feared that the port of Boulogne-sur-Mer “could lose its status as the leading French fishing port in the long term, given the foreseeable reduction in landings” of seafood “. A meeting on the same subject was held on Friday in Boulogne between representatives of the state and fishermen.

The sub-prefect responsible for Brexit, Paul-François Schira, warned that the controls, which initially “let the goods pass if no health risk has been identified,” would be tightened: “For certain non-documentary documents, we will reject or destroy the goods” . The point is to apply regulations “always better and with the associated consequences”.

“When a third-party product returns to France, it must have these health documents that at least assure us of the nature and quality of the products,” confirmed the Deputy Director of Food, Forestry.