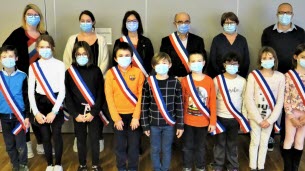 Then it was the moment of the solemn moment of handing over the three-colored scarf to the newly elected. In CM2: Lina Molard-Auger, Juliette Ribot and Tom Vasseur. In CM1: Cassy Michaud, Anaïs Razurel and Matéo Venet. And in CE2: Alexis Genton, Sophie Majorel and Lony Masnada.

Forging the citizenship of tomorrow

Each elected official, adult and child could introduce themselves at a round table. Lydia Léao explained what a community commission was set up for and translated the topics of environment, school matters, roads, safety, living environment, finances, urban planning, and culture and social issues. The various associations in the community were described.

Many questions were asked. “Why the bumps or the fluctuations in speed on the road? Lina Molard-Auger asked. While Alexis Genton wondered,” Why this order of colors on the three-tone scarf? “” We also had to answer Cassy Michaud’s question: “Why choose a mayor? “”

“A place for discussion and reflection”

The CME, or the municipal children’s council, is responding to the community’s desire to include children in political education projects to forge the citizenship of tomorrow.

“The CME is a place for discussion, reflection and suggestion for young people,” emphasizes Lydia Léao. It teaches children about local life and services. Their role is to encourage children’s participation in public decision-making and consultations with elected officials at local level to enable projects to emerge related to their achievements. “”

The children will participate in local life by attending special events like festivals or official inaugurations. The CME will decide whether the future 6th (CM2 this year) will take place next year. It will meet at least once a month on Friday after school.