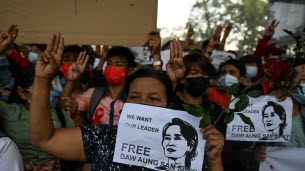 Thousands of Burmese took to the streets again this Sunday, despite internet censorship and arrests, to protest the military coup that overthrew Aung San Suu Kyi earlier this week.

A large number of riot police were deployed near Rangoon University in the northern economic capital of Myanmar, where the protest took place. No clashes were reported.

The state of emergency was set for one year

Burma has lived under the yoke of the army for almost 50 years since it gained independence in 1948.

Despite the fear, in a country accustomed to bloody repression like in 1988 and 2007, the people of Rangoon took to the streets again in the early hours of the morning to hunt down “demons”, the soldiers, by knocking on pots and pans .

On Saturday tens of thousands had already demonstrated in several cities to condemn the coup of February 1, which ended a fragile ten-year democratic transition. The military established a state of emergency for a year and arrested Aung San Suu Kyi, the de facto head of the civil government, and other officials from the National League for Democracy, their party’s.

Despite orders from the military to block the internet and social media, the rally was streamed online on Sunday on Facebook, where messages of support were received. However, the censorship continued and the means of communication remained very disrupted.

More than 160 people were arrested. Aung San Suu Kyi, who was recently criticized by the international community for her passivity in the Rohingya crisis, continues to be venerated in her country. She was charged with violating an obscure trade rule and was placed under “residence” in the capital, Naypyidaw. She would be in good health.

The United Nations called for the release of all detainees, but did not officially condemn the coup in its joint statement. Beijing and Moscow, traditional supporters of the Burmese army at the United Nations, rejected this formulation. The United States and the European Union are on their side and are threatening sanctions.