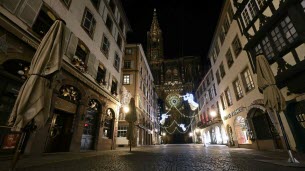 Should we reconfigure the country or wait to give the curfew a chance? The second option appears to be the one being considered by the government, which will meet this Wednesday morning during a health defense council to decide on the possibility of a new containment after the outlier.

“Let’s look at the results of the curfew, which is a considerable effort for the French, before they make decisions (…). Don’t rush,” said Economy Minister Bruno Le Maire on Radio Classique this Tuesday morning. The same story on the side of Agnès Pannier-Runacher, Minister of Industry: “Based on our data, there is no reason to choose at this stage of a delivery,” she explained, recalling the effectiveness of the 6pm curfew will be at the end of the Week measured.

While scholars believe a third restriction is inevitable, most notably Jean-François Delfraissy, President of the Scientific Council, the executive still relies on the 6pm general curfew, although the effects are still difficult to gauge. “Decisions will be made this week (…), it is not about lowering the guard,” Prime Minister Jean Castex assured on Monday.

In Emmanuel Macron’s entourage, we insist that “nothing has been done” and that it is a matter of “finding the right balance”. “We also want to be consistent with the French who have been trying for months,” adds the same source, while bars, restaurants, cultural venues, private gyms and universities have been closed since the end of October. that teleworking is widespread in the country and that the curfew has partially spoiled the year-end celebrations.

No speech by the president this week has been confirmed, but according to a source close to the executive branch, the head of state is considering a device that is still different from the first two sentences and is more flexible, especially for young people. According to the same source, Emmanuel Macron, eager to avoid a new restriction as much as possible, could take a few extra days before deciding to fully measure the effects of the curfew.

The executive will analyze four pieces of data to decide the rest of the restrictions: measuring the impact of the advanced curfew; the level of admissions and discharges in hospital and intensive care units; the spread of the English variant in France and the acceptance of new measures by the French.

Measuring the effect of the curfew

It’s still difficult to say on the first point. We will have to wait this Saturday – two weeks after its implementation – to assess the effects of the national curfew. According to initial estimates, the introduction of the curfew on January 2 at 6 p.m. in 15 departments reduced the incidence rate (number of cases per 100,000 population) by -15% compared to -2% in others.

Jean-François Delfraissy estimated on BFMTV on Sunday that “it will probably be necessary to work towards containment” and classified this measure as a “very barbaric tool” but effective in containing the epidemic. In an interview with Liberation this Tuesday morning, the President of the Scientific Council, responsible for advising the Executive, reiterated: “I think we are not in an extreme emergency. We are not anywhere near a week”, even if for him, The 6 p.m. national curfew is not enough to limit the spread of Covid-19 and contagious variants.

For the second criterion, the development of the situation in hospitals, the figures are not encouraging. Public Health France saw relative stability in the virus’s cycle with 128,551 positive cases in the week of January 11, but the trend appears to be increasing. 30,576 people tested positive on January 18 (27,638 last Monday).

While it was 8-9,000 in December, the number of new hospitalizations for seven days passed the 11,000 mark on Sunday. A total of 26,888 Covid-19 patients were hospitalized in the country on Monday (2,000 more than at the beginning of the month), 3,031 of them in intensive care, a number that is steadily increasing.

The spread of new variants

Regarding the third data, the executive is waiting for a new “Flash” survey by Public Health France, scheduled for Tuesday and Wednesday, to measure the prevalence of English and South African variants in France more precisely.

Jean-François Delfraissy had warned on Sunday that the variant VOC 202012/01, which caused an epidemic outbreak in the UK, was “closer to 7, 8 or 9% in certain French regions”, while an initial survey was measured on 7th March and Jan 8 at 1.4% nationally.

The French ready for a third detention?

The acceptance of the French in third custody is a criterion that should not be neglected. The President of the Senate, Gérard Larcher, estimated in Le Figaro that “everything must be tried with interim measures” in order to avoid that “full compliance (which) would have very severe human consequences, especially for young people”.

From an economic point of view, too, more restrictive measures will be difficult to bear: “We demand the right balance, that we leave all companies open, that we do not fall back into this somewhat absurd debate about the essentials, not the essentials.” that we had in November, “said the President of Medef Geoffroy Roux de Bézieux Monday on RMC.

We could face drama

In addition, according to a survey conducted by the Association of Small and Medium-Sized Enterprises (CPME) among its members and published on Tuesday, almost half of companies (49%) believe that they “cannot withstand a third restriction”. . Of 2,400 SME and Very Small Business (VSE) managers surveyed, 54% said they were “concerned about the sustainability of their business” compared with 47% in an earlier survey in September. And 53% believe that implementing the curfew will slow their activities down, which could be worse if it were again restricted.

According to an OpinionWay poll published January 18 for Les Échos and Radio Classique, three in four French people (72%) believe a new delivery will take place, but 56% do not want it. Rejection is even greater among the oldest people and therefore the most vulnerable: 64% of those over 65 reject a readmission, compared with 47% of those aged 18 to 24.

The French are dejected and Gérard Larcher praised the French’s “impressive resilience”, “but we must be extremely vigilant as we may face tragedy”. An important parameter for the government to avoid a general anger against the restrictions many countries are facing and a possible psychiatric wave …