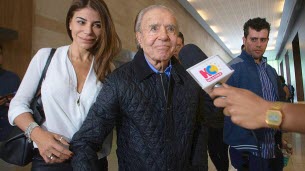 Former Argentine President Carlos Menem died on Sunday at the age of 90 in a clinic in Buenos Aires. He ruled the country between 1989 and 1999.

“During the dictatorship (1976-1983) he was persecuted and imprisoned,” said Argentine President Alberto Fernandez on Twitter and expressed his condolences to his family.

Carlos Menem, a senator since 2005, had been hospitalized several times in the past few months. On December 29, he was unable to participate in the Senate vote on the Abortion Act due to his hospitalization.

Carlos Menem is originally from the province of La Rioja (northwest) and ruled Argentina for ten years from 1989 to 1999. He led a neoliberal policy.

During this time he introduced “convertibility”, which fixed the peso-dollar exchange rate one to one. The national currency had experienced a violent devaluation during the historical economic crisis that followed.

Married to an ex-miss universe

The former head of state had three children from two marriages, the first to Zulema Yoma and the second to former Chilean Miss Universe Cecilia Bolocco.

He was the subject of a judicial investigation into several corruption cases but was never convicted.

He was placed under house arrest in 2001 for smuggling arms to Croatia and Ecuador. Several weeks later, he was released by order of the Supreme Court and finally released for the long century of law enforcement.