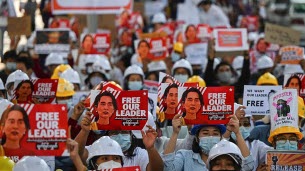 The Burmese took to the streets for the fifth consecutive year on Wednesday, a day after a nightly army raid on the Aung San Suu Kyi party center, an act that shows the coup generals’ determination to restore democracy.

We will do everything we can to oppose military government

“We will do everything we can to oppose the military government,” said Kyaw Kyaw, a hotel worker. “We do not want to remain under the dictatorship. I am a little afraid even after yesterday’s suppression,” added Khin Nyein Wai, a student.

A demonstration also took place in Naypyidaw, the capital built by the junta in the heart of the jungle.

Assault on the party center of Aung San Suu Kyi

The United Nations on Tuesday condemned the “disproportionate” and “unacceptable” use of force by the army, which carried out a coup last week. UN Special Rapporteur on Burma, Tom Andrews, condemned the use of force, saying police shot and injured a young woman in Naypyidaw. The images of this action were widely spread on social networks.

According to the NLD, the soldiers raided the training rooms in Rangoon on Tuesday evening.

In the past few days, hundreds of thousands of demonstrators have marched across the country demanding the release of those detained, the end of the dictatorship and the abolition of the 2008 Constitution, which is very beneficial for the army.

Burma has lived under the yoke of the army for almost 50 years since its independence in 1948. The February 1 coup ended a brief democratic bracket of a decade. The army denies the regularity of the parliamentary elections in November, most of which were won by the LND. However, international observers did not see any major problems during the survey.