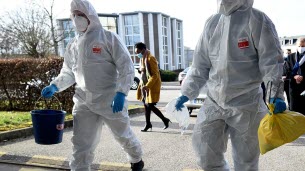 – According to data from Public Health France on Monday, 412 people in the hospital have died of Covid-19 in France in the past 24 hours, bringing the total to 82,226 deaths since the pandemic began.

– The Montpellier Administrative Court suspended the orders of the RN Mayor of Perpignan, Louis Aliot, who had decided to reopen four municipal museums, against the government’s health guidelines.

– Paris “does not want Germany to completely close the border with France”, while Berlin has partially closed its borders with the Czech Republic and Austria in order to curb the spread of variants.

– Italy has decided to keep the ski resorts closed, due to reopen on Monday due to the progression of the variants of the coronavirus.

– In the UK, Boris Johnson’s government intends to receive the profits from the massive campaign that made it possible to vaccinate more than 15 million people. Travelers coming from countries at risk for Covid-19 must now undergo an expensive quarantine in the hotel.

– The World Health Organization announced Monday that it had granted emergency approval for AstraZeneca’s anti-Covid vaccine, paving the way for hundreds of millions of doses to be distributed to disadvantaged countries that were previously vaccinated.