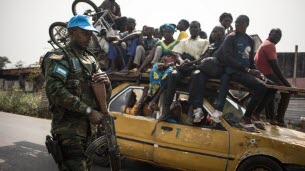 Central African forces have attacked rebels trying to block the capital Bangui and overthrow President Faustin Archange Touadéra’s regime. 44 of them were killed, according to the government, which claims it is “on the offensive”.

On December 17, the six most powerful armed groups, which had occupied two-thirds of the Central African Republic in the civil war for eight years, allied themselves in the Coalition of Patriots for Change (CPC), which was held on the 19th, eight days before the presidential and Parliamentary elections, an offensive aimed at preventing President Touadéra from being re-elected.

However, they encountered far superior and well-equipped armed forces: around 12,000 peacekeepers from the peacekeeping force of the UN mission in the Central African Republic (Minusca), present since 2014, but also hundreds of Rwandan soldiers and Russian paramilitaries who were dispatched from their countries at the end of December to save Touadéra and a destitute army.

“Offensive by the Faca (Armed Forces of the Central African Republic) and the Allied Forces of Boyali (village 90 km from Bangui, editor’s note). Rating: SAR on the friendly side. Enemy sides: 3 prisoners sent to Bangui and 44 dead, including several Chadian and Sudanese mercenaries and Fulani, “the government said on Facebook.

The Central African authorities generally refer to the Rwandan military and Russian paramilitaries as “allied forces”.

This government announcement has not been confirmed by independent sources.

“The government troops are back on the offensive,” said government spokesman Ange-Maxime Kazagui.

The town of Boda, 124 km from Bangui, was also “taken over by the authorities and the negative forces fled in different directions,” he also announced.

Since the start of their offensive in December, the CPC rebels have tried to “suffocate” the capital by cutting off the three main roads leading to it, according to the United Nations.

The rebels carry out sporadic but sometimes violent attacks, usually far from the capital, although two simultaneous attacks by around 200 attackers were repulsed on January 13 in Bangui.

On January 21, the government declared a state of emergency throughout the area for a period of 15 days so that “the authorities can make arrests without going through the prosecutor’s office,” said the presidency spokesman.

The UN envoy for the Central African Republic, Mankeur Ndiaye, called on the Security Council to “significantly increase” the number of peacekeeping forces stationed in the country.

The demand for an increase in the Minusca quota should also help President Touadéra, who was recently re-elected with 53.16% but after a vote in which two out of three voters did not vote, mainly for security reasons, to assert his authority while The UN representative in the Central African Republic has regretted a “major desertion” by the Central African security forces since December.

Mankeur Ndiaye did not specify the number of additional peacekeeping troops desired for the Minusca, which with 12,000 men is already one of the largest and most expensive UN operations in the world.