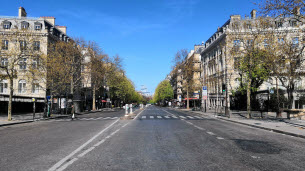 The 6 p.m. curfew “does not slow down” the spread of the Covid-19 virus enough to be “fully effective,” said Gabriel Attal, the government spokesman who is investigating “various scenarios”, on Wednesday.

These “scenarios” range from maintaining the current framework to a very narrow restriction, “he said after the Council of Ministers, which followed a health defense council at the Elysee Palace.

Here are the four scenarios considered:

According to the conclusions of the Defense Council, the circulation figures of the British variant are alarming. It is these data that are worrying, and the progress of which affects the balance of the other three criteria, namely hospital pressures, the impact of the 6 p.m. curfew, and acceptance by the French. These last three indicators are pretty stable for now.

The first scenario would be to maintain the curfew at 6:00 p.m. and restrict the weekends from 6:00 p.m. Friday to 6:00 p.m. Monday, as well as demanding restraint for fragile people.

Option number 2 would consist of a modified containment of the same type as the one introduced at the end of October, with strict containment on weekends. Non-essential businesses would be closed and that would be the return of the mandatory travel certificate.

Option 3 is the same as the second, but more activities have been suspended, especially some where exceptions were made in the fall. It remains to be determined which.

The fourth scenario is the strictest with the same containment as that of spring. Except that the schools would stay open. With the upcoming school vacation period, however, the zones would be merged into one zone with a possible extension of one week’s vacation. This means schools will be closed indirectly without changing the school pace. However, childcare can be an issue for some parents.

The decision is expected to be made this weekend. The government is waiting for the results of two studies – one on the effects of the curfew, the other on the progression of variants of the virus – and Gabriel Attal has promised to hold “consultations with parliament, the trade unions and elected representatives over the next few days.” Place “.