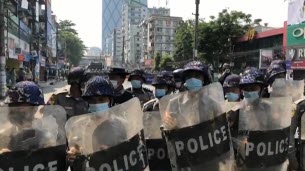 Almost a thousand Burmese protested this Saturday in Yangon, the largest gathering since the coup generals’ coup against Aung San Suu Kyi, as the country witnessed internet shutdowns across the country.

Access to Twitter and Instagram had already been restricted on Friday evening to silence the protest, especially on social networks where the hashtags #WeNeedDemocracy, #HeartheVoiceofMyanmar, #Freedomfromfear were used millions of times.

The Norwegian group Telenor, one of the country’s most important telecommunications operators, confirmed that the authorities had ordered the blocking of these platforms “until further notice”.

“We are deeply concerned” about this ruling, which “undermines people’s right to be heard,” said a Twitter spokesman.

The army had ordered two days earlier to prevent access to Facebook, the main communication tool for millions of Burmese.

These networks serve to “cause misunderstandings in the public”, justified the Ministry of Transport and Communication. To escape censorship, the Burmese are turning to VPNs, virtual tools that they can use to bypass geographic restrictions.

A coup that has not been officially condemned

Events continued to be the focus of the international agenda.

She “clearly expressed our position”: To end the coup and release the detainees, UN Secretary General Antonio Guterres told reporters on Friday.

However, the Security Council did not formally condemn the coup in its joint statement. The Chinese and Russians reject such a position.