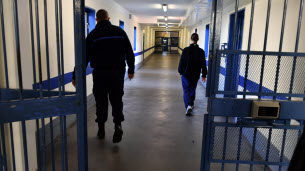 There were 62,673 prisoners in French prisons on January 1, a stable number compared to the previous month (62,935). This comes from statistics published on Monday by the Ministry of Justice.

With 60,583 locations in 188 prisons in France, the total prison density on January 1 was 103.4% compared to 103.8% the previous month. This density is greater in pre-trial prisons (119.4%), where prisoners awaiting trial and those who have received short sentences are held. It is also greater than or equal to 120% in around a third of the farms and reaches 193% in Nîmes or 184.6% in La Roche-sur-Yon.

By January 1, 688 inmates had to sleep on a mattress on the floor. This number, which we can use to measure overcrowding, has been on the rise for several months (422 mattresses were laid on the floor on July 1, 587 on October 1, and 654 on December 1). Among those detained, 17,856 are on trial, ie detained while awaiting trial, a little less than a third of the prison population.

A number on the rise after falling in first custody

On January 1, a total of 75,021 people were detained, including 12,348 people who were not in custody and who were subject to electronic surveillance or work permits.

The number of inmates in prison had fallen significantly last spring during detention, driven by a reduction in crime during that period and due to government early release measures to prevent the epidemic from spreading in custody. The number of inmates had fallen from 72,575 on March 16, 2020 – a record – to 59,463 two months later. The prison population has exceeded 62,000 prisoners since October.

To prevent a new wave of the prison epidemic, Justice Minister Eric Dupond-Moretti, in a notice sent to the prosecutor in late October, reminded the need to “maintain as much as possible (…) a prison density in line with health measures”, by favoring alternatives to imprisonment for short sentences.