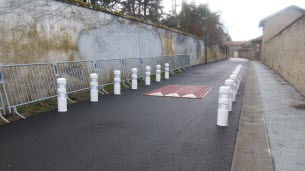 The Loire Forez Agglos educational radar installed a few months ago on several axes in the village showed a speed that was sometimes far too high (more than 100 km / h in the middle of the village). Through the work of the Road and Safety Commission, the municipality decided to secure several lanes.

Rue du Forez: creation of a 30-zone zone that covers the entire street.

Rue des Lilas: Construction of a chicane with signs at 30 km / h.

Rue du Stade: creation of a chicane and zone 30 across the entire street.

Rue des Balmes: Installation of a castle and a Berlin pillow. The road is limited to 30 km / h over its entire length.

Rue des Piquettes: installation of a chicane and zone 30 before climbing into rue de la Garenne.

Rue des Plantées: installation of a chicane and a castle. The speed limit on this street remains at 50 km / h.

The work is now complete. They cost 13,000 euros and are financed from the operational area of ​​the community.

Over the next few days, an experiment will be carried out to turn off public lights from 11pm to 5pm in rue du 19-Mars (parking near the tennis courts) and rue du Stade.

This decision, which is based on a period of six months, i.e. H. By June 2021, in line with the extinction of the night lighting that is already in effect in the gardens behind the town hall.

The aim is to limit energy consumption, protect biodiversity and discourage gatherings of people near houses and gatherings that cause nuisance.