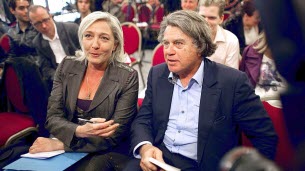 National Rally (RN) President Marine Le Pen and MEP RN Gilbert Collard will be on trial in Nanterre on Wednesday for posting photos of Daesh abuses on social media in 2015.

The far-right chairman, a finalist in the 2017 presidential election, is being prosecuted for tweets released in December 2015 just weeks after ISIS ‘attacks in Paris and Seine-Saint-Denis. In response to journalist Jean-Jacques Bourdin, whom she accused of drawing “a parallel” between Daesh and the National Front (now RN), Marine Le Pen forwarded three photos of abuse by the jihadist group with the words “Daesh” on them , that’s it!”

The photos showed a crushed Syrian soldier living under the tracks of a tank, a Jordanian pilot who was burned alive in a cage, and the decapitated body of American journalist James Foley with his head resting on his back.

Collard and “the shock of the wounds”

Gilbert Collard, then Gard’s deputy, posted a photo of a man lying on the ground with a broken skull on his Facebook and Twitter accounts the same day with the following comment: “Bourdin compares the FN to Daesh: the weight of the words and the shock of the wounds! “

More precisely, on December 16, 2015, Jean-Jacques Bourdin said during a program with the specialist in the Arab world, Gilles Kepel: “I would like to come back to the links between Daesh and the front … ultimately the links, not the direct links between Daesh and the National Front, but this deprivation of identity, which is ultimately a community of spirit because the idea for Daesh is to push French society to retreat. “

In a France traumatized by the attacks, the publication of pictures of abuses had caused an outcry: the Nanterre public prosecutor’s office immediately initiated separate proceedings against the two political leaders after a report on the pictures by the interior minister.

Marine Le Pen was indicted in March 2018, two months after Gilbert Collard, after her parliamentary immunity as an MEP and then a MP was withdrawn. In September 2018, an examining magistrate ordered a psychiatric expertise from Marine Le Pen, as provided for in the texts. But the politician had refused to submit to him and denounced “totalitarian methods”.

What the defense is saying

“Marine Le Pen never intended, let alone her conscience, to endanger minors. She responded to an attack, a provocation by a journalist,” said her lawyer Me David Dassa-Le Deist.

“It’s a political process,” I told Jean-Marc Descoubes, Gilbert Collard’s lawyer. “We have to remember that when we were a year before the presidential election the context was extremely tense,” he said.