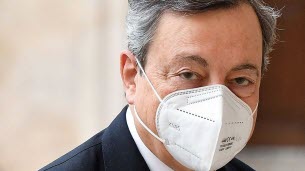 Mario Draghi was officially sworn in as the new head of government in Italy on Saturday after weeks of political instability.

“I swear I am loyal to the Republic,” said Draghi, former President of the European Central Bank (ECB), during the inauguration ceremony in front of Italian President Sergio Mattarella, which was broadcast live on television from the Presidential Palace.

Mario Draghi, dubbed “Super Mario” because of his role in the Eurozone 2012 debt crisis, will appear before the Senate on Wednesday and the House of Representatives on Thursday to cast the vote of confidence that will give his government final legitimacy.

The ex-President of the European Central Bank, appointed by President Mattarella to succeed Giuseppe Conte and forced to resign after the collapse of his coalition, elected a man of confidence, Daniele Franco, for the key ministry of the economy.

Regarded as one of the peninsula’s top public finance experts, 67-year-old Daniel Franco spent most of his career at the Bank of Italy, of which Mr Draghi was governor, until he became number two in early 2020.

Mario Draghi, however, played continuity in several other important positions: for example, he confirmed Luigi Di Maio, high-ranking official of the 5-star populist movement (M5S), as foreign minister, technocrat Luciana Lamorgese to interior minister and Roberto Speranza, from the small left-wing LEU party to for health.

The new head of government skilfully mixed technocrats and political leaders and selected competent personalities from all parties who offered their support without, however, addressing the leaders.

He also announced the imminent creation of a “super ministry” for ecological transition, led by a renowned physicist, Roberto Cingolani, who has been responsible for technological innovation at Italian aviation giant Leonardo since September 2019.

Since Mr Mattarella appealed to him on February 3, Mario Draghi has had extensive talks with the political parties represented in Parliament, which have enabled him to form a diverse team from the Democratic Party (PD, center-left) to the far . right league of Matteo Salvini through the right Forza Italia party of Silvio Berlusconi.

On Thursday, in an extreme case, the 5-star movement, which was not classifiable until the takeover of power, gave the green light and thus removed the last obstacle to a government of national unity.