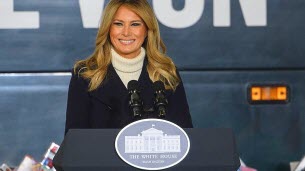 First Lady Melania Trump posted a goodbye message on Monday as she prepares to leave the White House.

“Be passionate about everything you do. But always remember that violence is never the solution and will never be justified,” she said days after the president’s supporters attacked the Capitol.

In an official six-minute video speech, the First Lady of the United States made only a brief reference to her husband as she helped military families, health professionals affected by the novel coronavirus pandemic, and those who were victims of opioid drug abuse , Paid tribute.

I think of all the people I have kept in my heart and their incredible stories of love, patriotism and determination

“The last four years have been unforgettable,” said Melania Trump, a 50-year-old former model. “As Donald and I end our time at the White House, I think of all of the people I have kept in my heart and their incredible stories of love, patriotism and determination.”

“When I first came to the White House, I pondered the responsibility I have always felt as a mother to promote, strengthen and teach values ​​of kindness,” he said.

The outgoing president, who urged his supporters to march on Capitol Hill, has since been charged by the House of Representatives with “inciting insurrection” and his Senate trial, which could begin shortly after his successor’s inauguration on Wednesday. In response to the attack on the Capitol, Washington has taken on the appearance of an entrenched camp in recent days. Authorities fear new unrest on the verge of Joe Biden’s swearing-in. The outgoing president has for the past few months refused to accept the poll results, highlighting false allegations of fraud and refusing to congratulate Joe Biden.

Donald and Melania Trump did not invite Joe Biden and his wife Jill to the traditional Oval Office visit and they will not attend the inauguration of the new head of state.

“The promise of this nation belongs to all of us who do not lose sight of our integrity and values, who use every opportunity to show consideration for another person and to develop good habits in daily life,” said Melania Trump in parting.