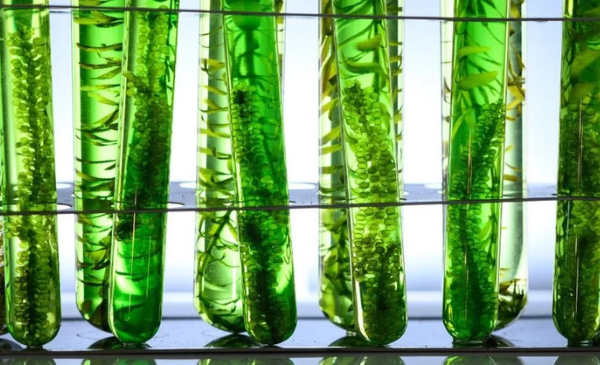 The ability of solar panels to capture pure solar energy has made them highly popular. However, a firm is developing an algal panel that not only creates electricity but also absorbs CO2.

The concept is fantastic, however the method is a little complicated. It all begins with a panel of water loaded with algae. As the algae grows, CO2 gas is added to the liquid in order to “feed” it (photosynthesis).

It is claimed that the carbon footprint of another CO2 source is reduced by harvesting CO2 from someplace. Algae may theoretically absorb twice as much CO2 as they weigh.

Algae develop quicker and larger when exposed to more sunlight. It’s necessary to partly empty the algae from the panel before starting the process again. C02 is absorbed in this manner.

Greenfluidics, a firm located in Mexico, developed this technology. According to the business, their Biopanel can produce 328 KWh/m2 per year, which is equivalent to solar panels. Thermoelectric generators are normally less efficient than solar panels, thus this is shocking to me.

Although this is not explicitly stated in Green Fluidics, it’s a safe assumption that biomass is turned to fuel in a separate facility. A breakdown of the energy generated is required if this is not the case.

Aside from routine cleanings, the algae panel has to be cleaned on a regular basis. I’m a fan of the concept, but I think it’s best suited for industrial rather than consumer application.

Some facilities, particularly those built from the ground up specifically for this application, may be able to make good use of this. Last but not least, the removal of CO2 may be interesting since it would be simple to measure and could also generate or earn carbon credits