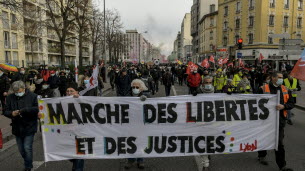 Intersyndicale of the journalist CFDT-CGT-FO-SNJ, League of Human Rights, National Council of the New Resistance, Attac, Trade Unions, Yellow Vests … The collective No to the Global Security Law organizes a new “March of Freedoms and Judges” this Saturday in Lyon . The meeting will take place at 1 p.m. in Lyautey (6th district of Lyon). The speeches will take place at 1:30 p.m. before the start of the event at 2:00 p.m. The procession leads down the banks of the Rhône to the Pont de la Guillotière and then flows over the Place Antonin-Poncet into the Place Bellecour.

The last march on January 16 was not completed. The procession had to turn back after being broken up by the police.

The Prefect’s Delegate for Defense and Security, Thierry Suquet, issued a new decree banning much of the peninsula from demonstrators. From 10 a.m. to 6 p.m., the area between Terreaux and Bellecour (excluding Bellecour), Place Carnot and Rue Victor-Hugo is closed to demonstrators.

The prefecture highlighted the January 16 incidents: “200 people threw numerous projectiles (glass bottles, cobblestones, etc.) at the police, fired mortars at them, degraded bus stops, billboards and bank windows”. According to the prefecture, 22 police officers and 3 civilians were injured. Ten people were arrested.

For its part, the Police Violence Committee identified more than thirty wounded on the demonstrators’ side, including at least “17 people with fractures, open wounds, bruises or bruises” and “an exceptional number” of people with difficulty breathing. Two had lost consciousness, according to the committee.

Also note that this Saturday at 10 a.m. Place Bellecour, the Collective of the Sans-Papiers of Lyon, Lyon Anticra and the Genepi Lyon (National Student Group for Teaching Inmates) are calling for a rally against the construction of a new administrative prison, near the Saint-Exupéry airport.