Outrage after the testimony of a “tortured” student 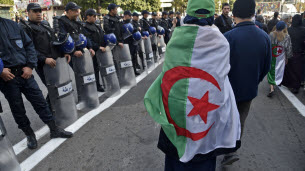 The testimony of a young Algerian democracy student who claims to have been tortured by members of the security services sparked indignation in Algeria for several days.

“I lived through hell,” said 25-year-old Walid Nekkiche, who was recently released after more than a year in prison in the French-language daily Liberté. “I went through a lot during those fourteen months in prison, and especially the six days I spent in the Ben Aknoun barracks,” known as the Antar Center in Algiers, testifies to the student at the Higher Institute of Sciences of the Sea and Regional Planning (Ismal).

“There was a lot of pressure on me. After this long and excruciating passage in this eerie place, I was introduced to the examining magistrate of the court of Bab El-Oued (north of Algiers) before I was imprisoned in El Harrach prison.” he added.

Sentenced to six months in prison

The young man was released Wednesday after being sentenced to six months in prison for “distributing and possessing leaflets in order to harm the interest of the country”. The prosecutor of the Dar El Beida court in Algiers on Monday requested a life sentence against the student, who was charged with “conspiracy against the state”, “attacking the integrity of the national territory” and “inciting the population to take up arms” very much serious charges under Algerian law.

Tizi Ouzou, a native of Kabylia, was accused of belonging to the Movement for the Autonomy of Kabylia, an illegal separatist organization, according to Algerian media. “Fortunately, I did not collapse because I was confident that the lawyers were determined and well equipped to bring the false charges against me. I had to hold on for my parents,” said Walid. Nekkiche from Liberty.

I was attacked sexually, physically and verbally

During the trial on Monday, the student said he was “sexually, physically and verbally assaulted by security services during his interrogation.”

The discovery of this abuse sparked outrage and received extensive commentary on some media and social networks, with calls for an investigation increasing. Authorities have not commented.

“We asked for an independent investigation and a judicial investigation to be opened to determine who was responsible,” said Said Salhi, vice-president of the Algerian League for the Defense of Human Rights.

The request follows “serious statements” made by Walid Nekkiche during his trial in which he alleged “he was tortured in police custody,” Salhi said. According to him, the student’s attorney filed a complaint in July but “there was no follow-up”.

In a joint statement, the National Committee for the Liberation of Prisoners (CNLD) and the National Coordination of Algerian Academics for Change condemned “torture” and “normalization of violence, which in Algeria are reaching alarming proportions”.

Walid Nekkiche was arrested on November 26, 2019 in Algiers during a weekly march by students of the anti-regime protest movement “Hirak”, born in February 2019.

His co-defendant Kamel Bensaad (43) was acquitted. According to the CNLD, around 80 people are currently detained in Algeria in connection with the “Hirak” protests and / or individual freedoms. In at least 90% of cases, law enforcement is based on publications on social networks that are critical of the authorities.