Over the next few years, e-commerce sales are expected to soar 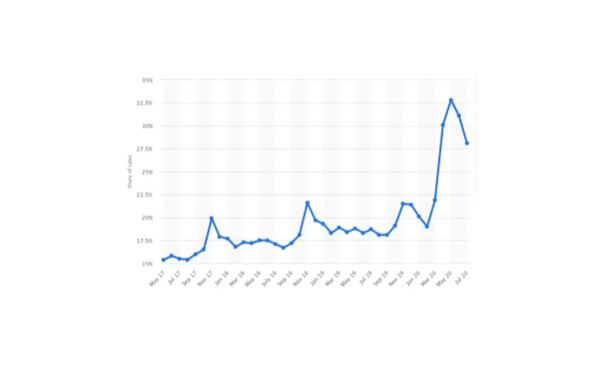 Recent studies suggest that the popularity of online marketplaces is here to stay.

As more businesses move their transactions online, a recent study by Juniper Research predicts that many platforms will continue to grow their digital assets.

The forecast predicts that by 2027, digital commerce transactions worldwide will top 20 trillion, which is not too dissimilar from the entire GDP of the United States, the world’s largest economy. A 62 percent increase over the next five years would bring the figure to about 12.3 trillion in 2022 (roughly the same as China’s GDP, which is second).

The Future of Online Shopping: BNPL and Digital Payments

The numbers incorporate everything from wire transfers to online shopping to banking to paying bills. The growth of the industry is attributed in part by the research firm to near-field communication (NFC) payments, which allow for quick and easy transactions in brick-and-mortar stores.

According to the study’s estimates, the use of NFC payments in digital commerce will increase by an astounding 176% over the next five years.

Apple Pay and Google Pay use NFC technology, which, when combined with biometric security measures like fingerprint or facial recognition, significantly lessens the possibility of fraudulent transactions.

We quickly took to online shopping during the pandemic, and Juniper Research has proposed two improvements. To begin, rapid expansion is anticipated because of developments in the industry’s supply chain and order fulfilment infrastructure. Second, the research suggests that retailers speed up shipping times and accept more payment options, such as “buy now, pay later,” if e-commerce platforms are to remain competitive.

As the retail sector continues to adapt to the rise of online shopping, Square has also launched its own pay later scheme, in which it will collaborate with Clearpay.