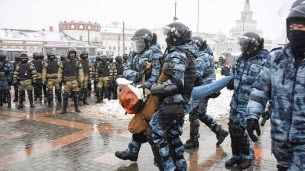 France on Monday called on Germany to abandon the Nord Stream 2 gas pipeline project with Russia in response to the fate of Russian opponent Alexeï Navalny in his country.

“We have always said that in this context we had the greatest doubts about this project,” said Clément Beaune, State Secretary for European Affairs on Radio France Inter. Does France approve of the task? “We’ve said it before,” he replied.

According to the OVD-Info organization, which specializes in monitoring demonstrations, at least 5,289 people were arrested in 88 Russian cities on Sunday, but mainly in Moscow (1,712) and Saint Petersburg (1,164). A record figure “in the history of modern Russia,” she notes.

New protests called for the release of the opponent Alexeï Navalny, who is due to appear in Russia on Tuesday and has three years in prison. Anti-corruption activist and sworn enemy of the Kremlin, Alexeï Navalny (44), returned to Russia on January 17 after months of recovery in Germany for alleged poisoning, for which he accuses Vladimir Putin and the Russian security services of being responsible.

The protests are also fueled by the dissemination of an investigation by his team into which President Vladimir Poutine is accused of profiting from a huge “palace” on the shores of the Black Sea, which he denies.

More than 4,000 people were arrested and around 20 criminal cases opened at previous gatherings last Saturday.