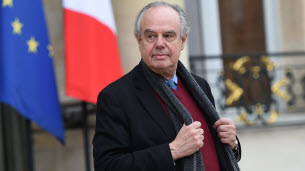 Former Minister of Culture Frédéric Mitterrand (73), sick with Covid-19, was “urgently admitted to a Paris hospital on Wednesday” according to a family declaration on Thursday.

“Although his health is stable, he will remain sensitive for the next few days. He contracted (the disease) Covid-19 10 days ago during a small family get-together over the Christmas holidays,” the press release adds.

In November, the former minister, writer and television man published a book entitled “Une Drôle de guerre” (Robert Laffont) about his brother Jean-Gabriel Mitterrand’s fight against the virus in March and the daily newspaper of Patients’ relatives.

Elected to the Academy of Fine Arts

Frédéric Mitterrand, nephew of the former President of the Republic, in turn cinema operator, TV presenter, documentary filmmaker and film director, ran the Villa Medici in Rome before being appointed Minister of Culture from 2009 to 2012.

Last February, he was employed at the Academy of Fine Arts, chaired by the actress Jeanne Moreau, in the field of cinema and audiovisual media.