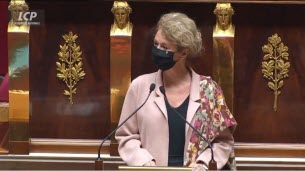 His speech to the National Assembly this Thursday was possibly his last alongside his colleagues. Sophie Auconie, member of the Unions des Démocrates Indépendants for the 3rd district of Indre-et-Loire, announced that she would end her mandate, which started in June 2017, due to many health problems.

“This text will certainly be one of the last that I will debate in my life as a Member of Parliament,” said the man elected on Thursday before the meeting during the debate on the text of the law on sexual violence against minors, which was ultimately elected unanimously. At the end of her speech, the centrist – who is very committed to violence against women and children – was warmly welcomed by her colleagues, who were moved and all stood in a semicircle.

In an interview with France Bleu Indre-et-Loire on Tuesday, the Vice-President of the UDI explained her struggle and caused a “Covid infection”, a “removal of the mammary glands” after cancer of the two breasts and “another hospital stay for other problems” .

“All of these are fights that I must fight with serenity,” added the 57-year-old elected official, who feels unable to combine her health concerns and political commitment. But “it is death in the soul that I make this decision,” she also confided to the local radio.

An ovation to the assembly

On Twitter, Sophie Auconie received several messages of support from centrist MPs, particularly praising her political commitment and her courageous decision to end her mandate.

On the way to the parliamentary elections in May

Faced with the health crisis, Sophie Auconie believes with France Bleu that her constituency needs an elected official “who is extremely present”. His withdrawal of more than a year from the next parliamentary elections should lead to partial elections in the 3rd constituency of Indre-et-Loire next May to elect a new MP.

The 57-year-old centrist will gradually resign from her post as MP in the coming days and weeks, but a new post is already waiting for her: that of Vice-President of the Traffic Inspectorate, an institution responsible for the proper functioning of the activities of the Rail, motorway and airport transport on French territory. A position that enables Sophie Auconie to “maintain a link with the territories”, as she explains France Bleu.