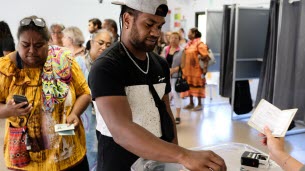 The collegial government of New Caledonia fell on Tuesday after the resignation of the independents from the executive branch, who denounced “the impasse and the immobility” in the archipelago, where the separatists of New Caledonia plunged the created government into a climate of tension for several months.

The FLNKS separatists have five out of eleven members of the executive branch. Her resignation, as well as resignation from the list, will de facto lead to the overthrow of the collegiate government elected by Congress members. According to the status of the Nouméa Agreement (1998), a new government must be elected within 15 days.

One of the reasons cited by the FLNKS is the “sales process” of the Brazilian group Vale’s nickel plant, “which prioritises the interests of multinational companies without taking into account the aspirations of local people”. The sale of this industrial facility to a Caledonian and international consortium including the Swiss giant Trafigura could be completed on February 12th. However, it sparked an outcry in the independence movement and was the source of an outbreak of violence in December. The factory closes after being stormed by rioters on December 10th and is the target of constant mistreatment.

The separatists also blame “the delay in voting on the island’s primitive budget”, which was postponed until March, as well as “the collapsed institutional dynamism and consensus that is becoming less and less the norm”.

L’Avenir en Confiance (AEC), a coalition of the main non-independence parties that made up President Thierry Santa, criticized “an incoherent, irresponsible and dangerous decision”. “By triggering an institutional crisis in the midst of dealing with the health crisis, a possible budget crisis and severe economic and social tensions, the separatists pose an immense risk to all of New Caledonia,” it said in a statement.

Milakulo Tukumuli, chairman of Oceanic Awakening, a central party in Congress with the ability to form and defeat majorities, said the separatists’ decision was “to block the sale of the Vale factory “.

A meeting of community leaders planned for February 12 to validate the project with Trafigura would have been brought forward to Wednesday, according to several sources.

The toppling of the government comes four months after the October 4th referendum on independence, won with a short head by the pro-French (53.3%). A first referendum took place in 2018 and a third is still possible until 2022.