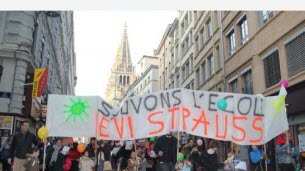 This time the mobilization of the parents of the students was not enough. The Lévi Strauss School on Rue Chenavard in the 1st arrondissement of Lyons will close its doors at the end of the 2020-2021 school year. A decision announced during the city council on Thursday January 28th.

In a press release, the joint Lyon group, jointly chaired by David Souvestre, district councilor for associative life, protested against this decision. “We, elected representatives of Lyon en Commun, speak out again against the closure of the Lévi-Strauss kindergarten and confirm our unreserved support for the parents of the pupils as well as for the education teams and municipal school agents.

“A bad signal for the residents”

And to add, “For months we’ve been pounding that a decision to close would send a bad signal to residents of the district. This means that public schooling is not essential; that families are not a priority; that children are seen as adaptive variables. “

For Lyon together, the closure of the Lévi Strauss school will “contribute a little more to the social deterioration in the district”.

The school, which was founded in 1897, could have remained open to the parents of the students by expanding the scope a little.