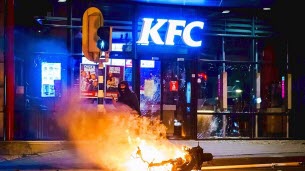 The patience of the population is being tested by a pandemic that will deprive them of their freedoms for a year. Many countries have been forced to introduce new restrictions to slow the progression of the epidemic with the arrival of new variants of the coronavirus that are more contagious.

The Netherlands experienced a second outbreak of violence on Monday night, staged by opponents of the curfew. Amsterdam, Rotterdam and The Hague, but also other places (Amersfoort, Geleen, Den Bosch, Haarlem …): In several cities riots broke out between confrontations between demonstrators and the police and vandalism against companies.

According to the Dutch public broadcaster NOS, 151 demonstrators were arrested at 2 a.m. The night before, the police had arrested 250 people in several cities during similar unrest.

Dutch discontent increased this weekend after the curfew went into effect in the country. This is a first since World War II. It is forbidden to leave your home at least until February 9th between 9:00 p.m. and 4:30 p.m. Each offender is fined 95 euros.

The prime minister said Wednesday that the decision to introduce a curfew was supported by the spread of the UK variant of the coronavirus. “It has nothing to do with the fight for freedom. We don’t take all of these measures for fun. We do this because we are fighting the virus and it is the virus that is taking our freedom away at the moment,” added Mark Rutte added. judge that “99%” of the Dutch support the restrictions.

Also in the Middle East …

Similar grumbling against the restrictions emerged on Monday in Tripoli, the large city in northern Lebanon, where security forces were forced to take in young protesters targeting the headquarters of local authorities. The Lebanese Red Cross has reported more than 30 injuries. The country has extended strict containment until February 8th.

The day before, clashes had been directed by police against ultra-Orthodox Jews in a district of Tel Aviv in Israel who were protesting against their imprisonment. Prime Minister Benjamin Netanyahu praised the “harshness” of the police who arrested thirteen people.

Police deployed in a district of Tel Aviv.

… in Spain and Denmark

In view of these restrictions, demonstrations were also held in Spain and Denmark on Saturday. Thousands of people demonstrated in Madrid denouncing the “deception” of a virus that some protesters say “does not exist”.

In the early evening several hundred people had gathered before they were presented with torches in Copenhagen, the Danish capital, and said “Freedom for Denmark, we have enough!” Shouts. against the anti-coronavirus measures taken by the executive. Non-essential shops, bars, restaurants and schools are currently closed in Denmark and the government has extended the restrictions until at least February 7th.

The group “Men in Black” has been organizing protests against “coercion” and the “dictatorship” of semi-detention in Denmark for over a month.

Police arrested three people on Sunday on suspicion of setting fire to a prime minister’s model during a protest against restrictions the night before.

But not in France

These are not the first anti-restriction protests. Others had already taken place in Spain, Denmark, but also in Germany, Italy and Switzerland.

In Rome, on November 2nd, police clashed with protesters protesting the restrictions.

France was not aware of such general demonstrations against the restrictive measures imposed, be it imprisonment or curfew. Meetings were held by sectors such as restaurateurs or students to express their anger.

But are the French ready for a third detention? You can tell yourself that given the not very encouraging health situation, this decision is inevitable, most of the time you do not sign it. According to an OpinionWay poll published January 18 for Les Echos and Classic Radio, three in four French people (72%) believe a new delivery will take place, but 56% do not want it.

“People are fed up with it”, analyzes in Les Échos Bruno Jeanbart, the deputy general director of the election institute. “There is a sense of resignation and fatigue in public opinion that raises both the question of acceptance and anything that accumulates in relation to dissatisfaction.”

The hashtag #JeNeMeReconfineraiPas appeared on Twitter over the weekend, followed by calls for a day of civil disobedience on February 1st. However, the phenomenon remains marginal. The French are preparing, of course, for a third detention with low morals, but not in the spirit of revolt. Will this possible reclosing be one too many?