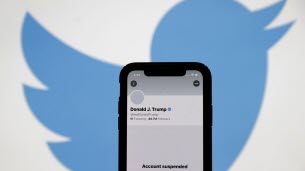 A few days after the raid on Donald Trump’s account, Twitter announced on Monday that it had “permanently banned” 70,000 accounts linked to the pro-Trump QAnon movement since Friday to prevent them from using the social network for violent purposes such as in the riot in Washington last week.

The platform embarked on a purge that began on Friday with the final suspension of the U.S. President’s account. He has been accused of encouraging his supporters to interfere with Congress confirming Democrat Joe Biden’s victory.

“These accounts have widely shared dangerous QAnon-related content. They were primarily dedicated to spreading these conspiracy theories throughout the service,” a Twitter statement said.

The number of accounts evicted is high as many people have had more than one.

Most major platforms have taken unprecedented action since supporters of the billionaire Republican stormed the Capitol for hours on Wednesday, shocking the country and tarnishing its image internationally.

In particular, Facebook and Twitter have indefinitely banned Donald Trump’s report, which hasn’t stopped in months discrediting the electoral process and blaming the Democrats without providing evidence that it “stole the election” from him. .

To justify their decision, the two networks specifically cited the risk of future violence between now and Joe Biden’s inauguration ceremony.

On Monday, French Economy Minister Bruno Le Maire criticized the closure of the American billionaire’s account and believed that it was not up to the Internet giants to regulate the digital space.