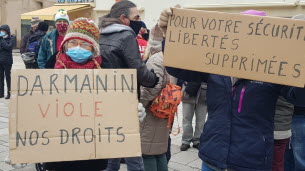 In Lons-le-Saunier, the Global Security Act is still being targeted by the CGT and SNJ (National Union of Journalists). This Saturday morning, January 16, a hundred people gathered on the Place de la Liberté.

“It’s about fighting the national system of law and order,” explains Daniel Bordür, founder of the Franche-Comté newspaper Factuel. “Prior accreditation to the prefectures for demonstrations is not acceptable. Telling journalists that they have to submit to the summons to disperse a demonstration is absolutely unbearable. “For Richard Dhivers, CGT delegate,” the ban on filming means that there is no control or balance in the case of police abuse. It affects journalists who cannot do their job. But it affects all citizens. “

During his speech, he denounced “the extension of the criteria for the registration of citizens by the police”. And to explain it: “Three clever decrees enable the authorities to collect, store and process data not only according to activity, but now also based on political opinions, union membership or otherwise still philosophical or religious convictions. We therefore understand quickly the danger of this shift. “

Interior Minister Gérald Darmanin affirmed that these three decrees do not expand the scope of action. “We changed ‘Political Activity’ to ‘Political Opinion’ because that is the concept of the General Data Protection Regulation (GDPR) law and we must comply with it. “However, according to the Official Gazette, the decrees change the categories of data that can be collected and the categories of recipients.” “”