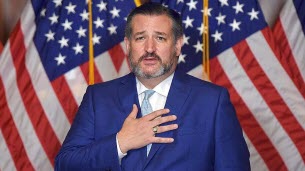 It’s called a big dumpling! As a deadly cold spell hit the United States for several days, Republican Senator from Texas, Ted Cruz, of Cancun, Mexico, flew into the sun. An excursion that its residents did not like and that was stranded in an unprecedented meteorological crisis.

The controversy began with photos showing him at the Houston airport, then on a plane to the Mexican resort. In social networks, the one Donald Trump called “Lyins Ted” (for “Ted the Liar”) quickly received the new nickname “Flyin ‘Ted” (“Ted the Wheel”). And calls to resign quickly spread on Twitter under the hashtag “#TedCruzResign” (# TedCruzDémission).

The Democratic opposition made the same criticism through Gilberto Hinojosa, President of the Democratic Party in Texas. “That Ted Cruz is flying to Mexico while Texans are dying in the cold is not surprising, but deeply worrying,” he said, complaining that he is “giving up” his state.

In the face of the avalanche of criticism, the Republican senator shortened his stay and made his Mea-Culpa in a press release. He said that after his school was canceled for that week, his daughters had expressed a desire to travel with friends: “To be a good father, I took the plane last night,” he said. Hours later he admitted it was “obviously a mistake” and in hindsight “he would not have done it”.

His escapade is all the worse when Ted Cruz warned the residents of his state by Monday at the latest. “Don’t take any chances. Make sure your family is safe, don’t leave your home and look after your children,” he said in an interview.

The situation is indeed very worrying: on Thursday, more than 300,000 households in Texas were still without electricity, where polar temperatures caused a spectacular increase in energy consumption.
With many water treatment plants paralyzed, more than 10 million Texans have had a supply problem, and most of them are forced to boil their water to make it potable.

The storm has killed at least 30 people in the United States so far.