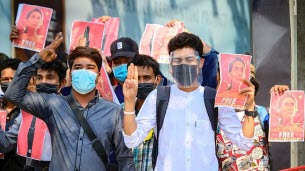 Burmese state television first threatened “action” against demonstrators on Monday when massive crowds protested the coup that overthrew Aung San Suu Kyi for the third year in a row.

First warning from the authorities

“Measures must be taken in accordance with the law (…) against crimes that disrupt, prevent and destroy the stability of the state, public security and the rule of law,” reported the state-controlled broadcaster MRTV. This is the first warning from the authorities since the protests began on Saturday.

The noose grows in the land. According to various estimates, several hundred thousand people gathered in the economic capital of Yangon on Monday. Demonstrations also took place in many other cities in the country, in which many residents demonstrated in a concert of horns on their two-wheelers, such as in Tangû, 300 kilometers north of Yangon.

Police used water cannons against demonstrators in the capital, NayPyidaw. According to the source, two people were injured while pictures posted on social media showed two protesters on the ground after being attacked by guns. The demonstrations took place on Sunday without major incidents.

This wind of protest has been unprecedented in Burma since the 2007 popular uprising, which was violently suppressed by the army.

What is the exact target of the protesters? Asks Soe Myint Aung, an analyst at the independent research center in Yangon. “Back to the fragile balance between civil and military government before the general election in November 2020 or this time to remove the army completely from power?”

The coup generals ended a fragile democratic transition on February 1, established a state of emergency for a year, and arrested Aung San Suu Kyi and other NLD leaders. Since then, more than 150 people – MPs, local officials, activists – have been arrested and are still in detention, according to AAPP. Internet connections were partially restored on Sunday after being severely disrupted for 24 hours.

Pope Francis expressed his “solidarity with the Burmese people” on Sunday and called on the military to work for a “democratic coexistence”.

A few days earlier, the United Nations had called for the detainees to be released, but the coup in their joint declaration, Beijing and Moscow, traditional supporters of the Burmese army at the United Nations, did not formally condemn this wording.

The United States and the European Union are on their side and are threatening sanctions.