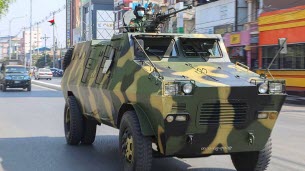 “If the situation continues, additional measures must be considered at European level (…) to mark both our support for the democratic process and our desire not to let this country drift into a military dictatorship”, underlined Jean-Yves Le Drian on Radio Europa 1.

The European Union had already imposed sanctions on seven military and border police officers in 2018 – an asset freeze and an entry ban – as the Rohingya Muslims in that country were cracked down on.

On Monday, the military brutally put an end to the fragile democratic transition by establishing a state of emergency for a year and the de facto head of the civil government, Aung San Suu Kyi, and other officials from her party, the National League for Democracy (LND).

The European Union “emphatically” condemned the coup and demanded the “immediate release” of those responsible.