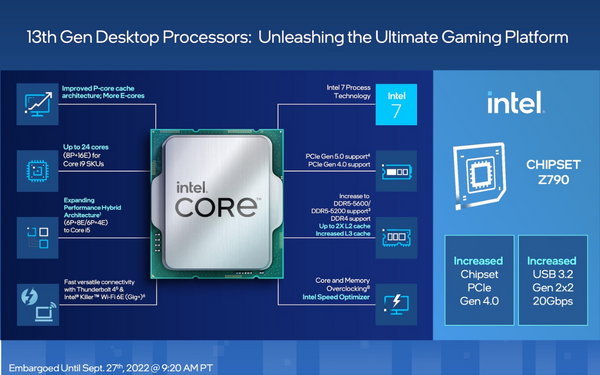 After years of making bold investments in cutting-edge technology like drones and moonshots like Volocopter and utilising them as showpieces at CES, Intel has adopted a more modest approach in the aftermath of Covid-19 and a broader shift in PR strategy. To commemorate its “first US flight,” Intel brought a whole Volocopter onto the stage that year and put its then-CEO inside.

The Las Vegas mega-show is still a significant milestone for Intel. A wide variety of consumer electronics businesses will be sizing up and buying in components for their products, making this a prime marketing opportunity as well as a barometer for the health of the industry as a whole. The company has introduced a number of new processors and computer specifications today, including the 13th generation of its Intel Core processor, a new 24-core processor called the i9, and a new N-series designed for “entry-level” education and mainstream laptops, desktops, and edge-native applications to combat the over-penetration of computers among business and developed world users.

Intel’s groundbreaking approach to computer processors many decades ago ushered in a new generation of smaller devices, but the company has certainly encountered some very fierce competition at the top end of the market and some would claim it missed the boat on mobile some years ago.

After declaring in September 2022 that it will retire its famous Celeron and Pentium processor brands, these new releases attempt to address all of this, offering leadership in the larger processing race of future while also looking for a position in the development of products for the general market today.

The i9-13980HX is the flagship of Intel’s new 13th generation core mobile CPU family, and it has 24 processing cores—more than any other laptop processor Intel has ever made. With a 5.6 gigahertz (GHz) turbo frequency and 11% faster and 49% faster performance for single-purpose and multitasking applications, Intel claims to have created the world’s fastest mobile (that is, laptop) CPU. Intel’s boast of having the world’s fastest CPU is qualified by the caveat that it will only remain such until December 2022. This is indicative of the state of the processor race in the present day.

According to the specifications, the processor’s 24 cores are split evenly between 8 Performance-cores and 16 Efficient-cores. Additionally, the processor benefits from 32 threads and “improved Intel Thread Director,” and it can use either DDR5 (up to 5,600 MHz) or DDR4 (up to 128 GB) of memory (up to 3,200 MHz). Superfast Wi-Fi 6E (Gig+) support; Bluetooth LE Audio and Bluetooth 5.2 support for faster speeds, multiple devices, and lower power consumption (so critical given earlier Bluetooth does drain battery); Thunderbolt 4 support for 40 Gigabits per second transfer speeds; and more are all on display, as are the current state of features expected by consumers in these devices.

IoT, “enthusiast,” and slimmer devices are all concerns that the H-, P-, and U-series mobile CPUs aim to solve. Intel claims that more than 300 different models from companies like Acer, Asus, Dell, HP, Lenovo, MSI, Razer, Republic of Gamers, Samsung, and others will be produced this year with their chips inside.

To further improve overall CPU and GPU performance, the 13th generation processors will also have a Movidius visual processing unit (VPU), developed in partnership with Microsoft to work seamlessly with its Windows Studio Effects. For more complicated applications and higher speeds, hardware is becoming more a software play, and this partnership is a remarkable marker of how closely hardware and software have had to bind together to progress. With no in-house vertical strategy for using chips, Microsoft is a natural fit.

“Together with Intel we continue to innovate to deliver powerful PC performance and experiences with Windows 11 and all of the products Intel is announcing today,” said Panos Panay, EVP and product head for Microsoft. “We’re excited for customers to benefit from substantial optimizations, like improved Windows support for Intel Hybrid Guided Scheduler, and meaningful new experiences, like with the Intel Movidius VPU unlocking a new era of AI acceleration, starting with Windows Studio.”

Meanwhile, Intel is positioning its new N-series CPUs as an upgrade from the Penium and Celeron families. As a result of being “purpose-built” for the education market, entry-level computing, and IoT edge-native applications, these gadgets will be marketed as more budget-friendly options than their predecessors. However, they will still be more cutting-edge than their predecessors and will represent an evolutionary step for the company.

Up to 10 hours of HD video playback (if nothing else is being used), improved camera and display support, and upgraded WiFi and Bluetooth are just some of the benefits of Intel 7 process technology, which features new Gracemont-based cores that provide 28% better application performance and 64% better graphics performance at peak compared to the older (now sunset) processors (they are based also on the i3 tech). Around fifty new ChromeOS and Windows designs from Acer, Dell, HP, Lenovo, and ASUS are expected to emerge this year, according to Intel.

Intel has announced that its new N-series processors will be utilised in a wide variety of retail signs, kiosks, point-of-sale systems, portable medical imaging devices, office automation equipment like copiers, and safety and security devices, all of which are connected to the Internet of Things.

Along with its processor announcements, Intel has also updated its laptop and portable computing requirements with the Intel Evo brand new for this year.

These are based on the new 13th generation processor, and they aim to improve the speed of charging as well as the amount of time devices can go without being plugged in; the performance of videoconferencing and other video and collaboration applications; and the integration of laptops, other keyboard computing devices, and mobile handsets and tablets. Intel calls this last feature “Intel Unison.” Again, this was a crucial step for Intel in the final stages of vertical integration, given the current state of the market, where laptop users almost always use them in conjunction with handsets, a trend that device manufacturers are eager to facilitate lest they lose those users as customers of the former products.

Accessories such as Thunderbolt 4 docks, displays, and storage, as well as wireless peripherals like headphones, keyboards, and mouse, will all function with Intel Evo. It remains to be seen if they will seem like gimmicks or defective gear that no one eventually uses; ultimately, the simplest and most failsafe tools tend to win out.