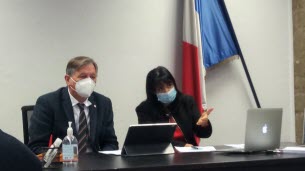 “I will not enter into the debate for or against the cable car, the real issue is the E underground,” proclaimed deputy Cyrille Isaac-Sibille.

During a press conference this Friday morning, the chosen modem (center) and the department president of the party Fouziya Bouzerda criticized the strategy of the majority of environmentalists in the metropolis.

Last December, Bruno Bernard, President (EELV) of the metropolis and Sytral, made the cable car project connecting Francheville with Lyon a priority of the mandate, leaving the E metro to Tassin-la-Demi-Lune on the marble. Cable traffic that has generated a lot of reactions from elected officials and citizens.

“This cable car does not make it possible to achieve the goals,” emphasizes Fouziya Bouzerda, former President of Sytral, before offering: “Things are done backwards, the project is registered during the consultation with the residents as a mandate plan is not finished. “”

For the two representatives of the modem, failure to track the West Lyons metro during this mandate would result in “two white mandates” while “we could have been digging in 2025”, with the public consultation going on.