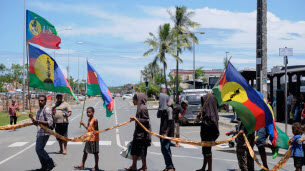 The separatists won a majority in the New Caledonian collegiate government on Wednesday, where they have six out of eleven members for the first time since the Nouméa Agreement began in 1998.

The election of a new government took place after a vote of the 54 elected members of Congress (advisory assembly) after the overthrow of the previous executive on February 2 with a loyal majority due to the resignation of the separatists en bloc.