The United States is officially back in the Paris Agreement 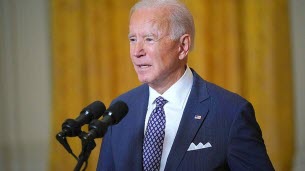 The United States officially returned to the Paris Agreement on Friday when President Joe Biden’s administration pledged to make the fight against climate change a high priority.

Almost four years after Donald Trump announced the withdrawal of the United States, this return of the world’s largest economy, the second largest emitter of CO2, means that almost every nation on the planet is now part of the 2015 agreement.

“This is a global existential crisis”

“We can no longer push back or do the bare minimum to respond to climate change,” said Joe Biden on Friday in the White House during his first major foreign policy speech at the Munich Security Conference.

“This is a global existential crisis. And we will all suffer the consequences,” he added.

The head of American diplomacy, Antony Blinken, also affirmed in a statement that “climate change and diplomacy through science” could “never again be optional additions” to foreign policy discussions.

“Responding to the real threats of climate change and listening to our scientists are at the heart of our priorities at home and abroad. This is (one aspect) vital to our discussions on national security, migration, international health measures and our diplomacy. Economic and trade negotiations, “said the Foreign Minister.

A call to increase ambitions

He praised the Paris Agreement negotiated by former President Barack Obama and also assured that the upcoming climate diplomacy would be of vital importance.

Former Secretary of State and ex-White House candidate, John Kerry, now United States Climate Envoy, urged the nations of the planet to revise their ambitions upwards. Climate at the UN Summit in Glasgow (Scotland)) in November.

Joe Biden had previously planned to hold another climate summit on April 22nd on Earth Day. The US President promised to bring pollution in the US energy sector to zero by 2035 and the US economy to be carbon neutral by 2050.

His predecessor Donald Trump, an ally of the fossil fuel industry, believed the Paris Agreement was unfair to the United States. However, the ambitions of the agreement are mainly non-binding as each country develops its own policies. One point Barack Obama and John Kerry insisted on when they signed in 2015 was concern for political opposition in the United States.

The Paris Agreement aims to limit the rise in global temperatures to two degrees Celsius above the level of the pre-industrial revolution and continue efforts to limit that rise to 1.5 degrees. The current political momentum is towards greater environmental ambitions at a time when the effects of climate change are becoming increasingly visible.

A recent study confirms that 480,000 people have already died from natural disasters related to extreme weather events this century.