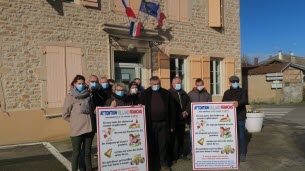 At the request of the municipal council, a delegation from the Agricultural Union “Rural Coordination”, made up of two farmers, headed by Valentin Lhuillier, Auvergne-Rhône-Alpes regional coordinator, came to meet elected officials and install two boards. at the entrances to the village. The mission of rural coordination is to defend the benefits of a rich and developed rural fabric.

The “French Village” sign installed on the RD1C aims to end the harassment that would be the victims of the rural world and the farmers who would be accused of harassment.

In a tone that should above all be humorous, he invites visitors to respect the rules that apply in our country and to benefit from the know-how of the local specialists. Otherwise, he advises dissatisfied people to go their own way.

With this gesture, the local council also wanted to defend the rural world

In Boz, however, there is not a major problem with the farmers and the bells, poultry and cows do not bother anyone. Some people were therefore surprised at the merits of such an exhibition. A delegation of four opponents was also present to discuss this with the union.

If they agree on the substance, they find the wording too aggressive and have suggested a different type of mark to the union. Valentin Lhuiller, who listened, felt that this poster was made like a press cartoon to get people to react. He admitted that depending on the comments, the formula could be revised with the idea of ​​writing “Welcome to a French village” instead.

One citizen stated: “I have lived in Boz for over thirty years and I don’t really understand the importance of the council’s approach. The village is quiet, there is no problem with the town’s farmers who are not numerous. These farmers are now also protected by a law passed on January 21st. The Senate finally passed the Rural Sensory Heritage Act. We wonder what we are afraid of! “”