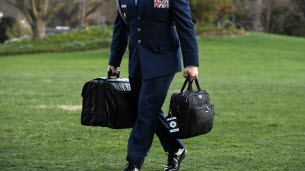 One last provocation from Donald Trump, who left power on Wednesday after four years? The transfer of nuclear codes between the outgoing President and his Democratic successor Joe Biden, the 46th President of the United States, who was sworn in a few hours later, did not go as it should.

The device for triggering the US nuclear arsenal is in a black leather case with a sturdy aluminum frame that weighs about 20 kilograms and is nicknamed “nuclear football,” explains NBC. . This autonomous command station accompanies the head of state on all his travels. It works thanks to an electronic card with the “biscuit” nuclear codes that the President always has with him.

Usually, the outgoing US president’s military assistant discreetly hands over the briefcase to his successor’s during the inauguration ceremony. But Donald Trump, who had spent more than two months denying his defeat, refused to take part in Joe Biden’s nomination – a first for 150 years. The handover of the suitcase did not go as planned.

Donald Trump went to Florida with the nuclear codes

With the Washington ceremony in full swing, the billionaire drove to Palm Beach, Florida, accompanied by around 30 cars, including one with the military officer holding the infamous suitcase.

Donald Trump was still president at the time of this trip and kept the “nuclear football” and the “biscuit” and thus the authority to launch a nuclear strike until the last second of his mandate – let’s say 11h 59 min 59 seconds.

Multiple copies to ensure the transition

It is, therefore, another case that contains the nuclear device and one more “cookie” brought in by Joe Biden during the inauguration ceremony in Washington. When the clock stopped at noon, Donald Trump’s nuclear codes were invalidated while those of the new Democratic president were activated.

A little later, Donald Trump’s “nuclear football” was brought back to the capital. The briefcase consists of three copies: one follows the president on his travels, another is kept in the vice president’s offices in case something bad happens to him, and a final one is kept by a secret person. the “designated survivor” in case the Vice President is unable to run the country in turn.

In France, the storage of nuclear codes is carefully kept secret. The outgoing President usually transmits them to his successor during the transfer of power at the Élysée, from a public perspective, but in the presence of the Chief of Staff.

The new president will then be informed of what is going on at the Jupiter command post, a real bunker built under the Elysee, explains Le Monde. There are several codes that correspond to the different levels of activation of the nuclear weapon, which the head of state would not be the only one to hold and which are regularly renewed.

On the other hand, a biometric identification process can be used to check whether the command to activate the nuclear arsenal actually comes from the President of the Republic. The black briefcase that follows him en route contains transmission paths that allow him to join anywhere but are not specifically designed for nuclear weapons.