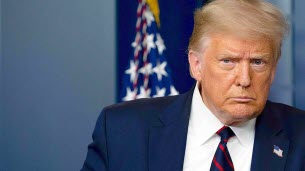 A year after a first historic impeachment trial, Donald Trump finds himself back on Tuesday in the position of a Senate defendant whose elected officials are due to tell whether the former President of the United States promoted the murderous attack on the Capitol in the last few days of his tenure.

Why is Trump on trial?

After two months of a gruesome crusade against the ballot box verdict, Donald Trump urged his supporters to demonstrate in Washington on the day Congress was due to record his rival’s victory. Against all evidence, he posed again as the victim of “massive fraud” and spoke in front of the crowd: “You will never retake our country by being weak. You must show strength.”

Moments later, hundreds of men and women entered the Capitol and sowed fear and chaos. Five people were killed in the attack, including a police officer who was beaten with a fire extinguisher.

It will be a few hours before Donald Trump urges his supporters to “come home” in a video in which he also tells them, “We love you”.

Why is this a historic day?

The violence of the January 6 attack, when elected officials confirmed Joe Biden’s victory as president, aroused such fear that the Democrats reactivated the impeachment process despite Donald Trump’s tenure touching his end.

Can he lose this lawsuit?

Donald Trump, who will be absent, is likely to be acquitted like the first time, as the 50 Democratic Senators will have a hard time convincing 17 Republicans to get the two-thirds majority of the 100 Senate members needed for a conviction.

Republicans do not want to dwell on this episode that is creating divide in them, as demonstrated by the motion of no confidence re-approved for the indictment on Saturday by the Wyoming Republican Party against state-elected Liz Cheney, one of the rare right-wing extremists Having voted Donald Trump. And Democrats have no interest in bringing a lawsuit that prevents them from focusing on executing Joe Biden’s agenda.

The Republican billionaire and his allies rely on his January 20 withdrawal from the White House to argue that the process is unconstitutional: Senators can fire a sitting president but cannot judge an ordinary citizen.

The Democratic Prosecutor, for its part, relies on the precedent set by a former minister who has been tried on the matter and insists that Donald Trump must be convicted in order to make him inadmissible and “dissuade the next few presidents from provoking violence, to stay in power “.

During the process, defense attorneys should focus on this legal debate to avoid having to justify their clients’ fiery tweets and abuse. Most Republican senators should also hide behind this argument to vote for acquittal without commenting on the merits.

What does he have to lose?

The ex-real estate mogul has a lot to lose in the trial, which is televised live in the US. Although it has a strong support base, the attack on the Capitol has undermined its popularity.

According to a poll published by Ipsos / ABC News on Sunday, 56% of Americans believe the ex-president should be convicted and excluded from re-election, but more than 80% of Republicans oppose it.

Anyone who, at the age of 74, appreciates the idea of ​​a new candidacy in 2024, has no interest in playing the episode and watching it repeatedly.