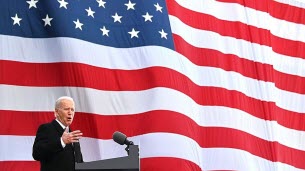 Joe Biden will take no fewer than seventeen presidential actions as soon as he steps into the White House this Wednesday to reconsider Donald Trump’s flagship actions.

In particular, he will herald the return of the United States to the Paris Agreement and within the World Health Organization.

From the Oval Office, he will also overturn a controversial migration decree from his predecessor banning nationals of predominantly Muslim countries from entering the United States.

The Democrat will also stop building a wall on the border with Mexico and funding from the Pentagon budget, which has sparked fierce political and legal battles for the past four years.

To limit the spread of the virus that has killed 400,000 people in the country, the president will also sign a decree mandating the wearing of a mask in federal buildings or for federal agents.

To mitigate the impact on people who have lost their incomes, it will also extend the moratorium on housing evictions and the break in repaying federal student loans, he added.