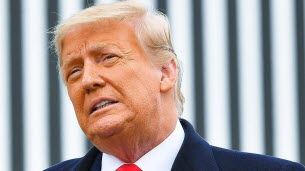 Donald Trump’s trial in the Senate opened on Tuesday. The ex-president is accused of having incited his supporters “to revolt” before the bloody attack on the Capitol.

Here’s what you need to know about this trial version:

What we accuse Donald Trump of

Pro-Trump protesters stormed Capitol Hill, the seat of American democracy, on January 6th. The powerful images of these moments and Donald Trump’s speech to his supporters a few minutes earlier should play a central role in the indictment.

“You will never retake our country if you are weak. You have to show strength, “he had addressed the incandescent crowd outside the White House before calling to go to the Capitol to” hear your voice in a peaceful and patriotic way. “

This trial is doubly historic: it is the first time a former American president has been tried.

And on January 13th, the real estate mogul was the first president to be twice “impeached” in the House of Representatives, this time for “inciting an uprising”.

Little chance of being convicted

The billionaire who now lives in Florida will not be brought to justice. And there is little doubt that he will be acquitted during his tenure.

The constitution requires a two-thirds majority for a guilty verdict. Even if Republican senators have harshly criticized the 45th president’s role in the violence, 17 of them are unlikely to join the 50 Democrats to condemn the billionaire who is still hugely popular with his grassroots.

For his lawyers, “President Trump did not press anyone to commit illegal acts.”

To say that he could be responsible for the violence of a “small group of criminals” who are “absolutely misunderstood” is “just absurd,” they wrote on Monday.

From Wednesday the fact-finding

As of Wednesday, the prosecution and then the defense will each have 16 hours to present their arguments.

The elected Democrats, who play the role of prosecutor, should broadcast many videos so that the senators relive the violence of the attack, but also the fiery speech of the president a few moments before.

The following day will give the senators a place of honor. Elected officials have four hours to put their questions in writing to both parties.

They will then speak for one hour at a time to request or contest the summons of witnesses or additional evidence. It is up to the senators to decide by a simple majority.
The outcome of this vote remains open, even if Republicans and Democrats have an interest in moving forward quickly, which could lead them to forego new elements.

Judgment from next week?

There is one thing that Democrats and Republicans have in common: They want to move quickly, and a final vote could take place early next week.

Republicans for not wanting to dwell in a phase that divides their ranks; Democrats because they want the Senate to quickly focus on their priority: approving Joe Biden’s candidates and laws.