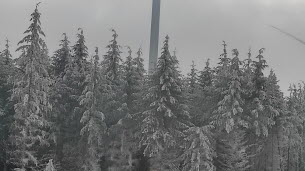 The National Rally wants to put ecology at the center of its campaign for the departmental elections … and shows it!

On Saturday morning, Rémi Berthoux (RN candidate for the canton of Thizy les Bourgs), Andréa Kotarac (candidate for the RN candidate for the region 2021) and Michèle Morel (department head of the RN in the Rhône) were in Valsonne in the heart of the park wind to assert their resistance to this energy. “Nobody talks about wind turbines even though they affect the population. Our position is clear, we are against it. Two more parks are planned in the area, in Saint-Bonnet-des-Bruyères and then in Joux. They are installed without asking for the opinion of the residents, ”complained the local candidate who wants to defend“ the harmonious development of landscapes and living environment ”.

A position shared by Andréa Kotarac, who supported her: “We were lobotomized by saying that wind power is good. However, supporters of this energy are often in metropolitan areas and not in our rural areas. We defend hydropower and nuclear energy, which are still the French sector of excellence. “”