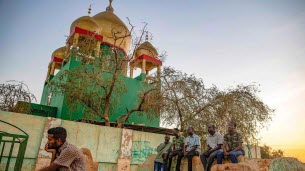 The violent clashes that struck Darfur for three days, leaving at least 130 dead and many injured, underscore the deep tribal differences in this troubled region of Western Sudan.

This new violence comes as the interim government in Khartoum, installed after the dismissal of former President Omar al-Bashir in 2019, is trying to stabilize the region following the recent departure of the UN peacekeeping mission.

However, the recent clashes call into question the historic peace agreement recently signed between the government and the Darfuri rebels in October and the authorities’ ability to provide security.

Residents of Al-Geneina, West Darfur state, woke up to an “intense shooting” on Saturday. “It all started on Friday with an argument between two people, one from the non-Arab Massalit tribe and one from an Arab tribe,” said resident Adam Hussein. The argument “ended in a stitch,” he continued.

Looting and murders took place in the local market

Authorities quickly arrested the killer, but “armed militias used this incident as an excuse to attack Al-Geneina,” according to the Darfur Lawyers Association. “These militias have caused panic (…) which has committed all kinds of human rights violations,” reported the association.

The clashes lasted until Sunday despite a curfew imposed by local authorities. “Looting and killings took place in the local market and in other districts,” said Hussein.

The violence spread and clashes broke out on Monday in a village in South Darfur state where the non-Arab Fallata tribe lived.

A chief of this tribe, Mohamed Saleh, told AFP that men from the Arab tribe of Rizeigat attacked the village of Saadoun, killing 47 people and burning several houses.

The violence underscores the state of “inter-community relations in each of the camps of the unsolved civil war in Darfur,” said Magdi El-Gizouli, an analyst at the Rift Valley Institute. “The scenario played out in Al-Geneina is the basis of the violent drama in the region,” he said.

The conflict in Darfur began in 2003 between forces loyal to the regime of General Omar al-Bashir in Khartoum and members of ethnic minorities who consider themselves marginalized.

According to the United Nations, around 300,000 people died in the violence, especially in the first few years of the conflict, and more than 2.5 million were displaced. When it comes to access to land and water, clashes between nomadic Arab shepherds and Darfuri farmers are still frequent.

Darfuris have suffered extreme violence and atrocities for years

On December 31, the United Nations and the African Union concluded their 13-year peace mission (UNAMID) in Darfur. Hundreds of displaced people demonstrated against the end of this mission for fear of renewed tension.

UNAMID might not have been able to prevent the violence, but according to Jonas Horner of the International Crisis Group’s think tank, their presence had a “deterrent effect”.

The government has promised to keep the region safe, but according to Horner, the forces in Khartoum are “poorly equipped”. The Sudanese security forces also include the Rapid Support Forces, a paramilitary group made up of Janjaweed, an armed militia made up mainly of Arab nomads and accused of “ethnic cleansing” and rape during the conflict.

“The Darfuri have suffered extreme violence and atrocities for years by the same military and paramilitary forces that are now charged with protecting them,” Horner said.