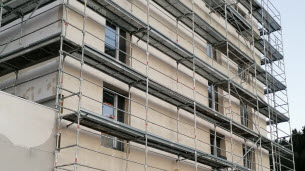 The nursing home facility for dependent elderly people in Bourg-Argental has launched a partial restructuring program that includes the expansion and reconstruction of the facility at 5 rue du Docteur Moulin with 123 units.

With the installation of parapets on the roof terrace, the Chazelle company completed the construction work for the extension of the south wing and transported its crane in order to carry out the extension of the wing since the beginning of the year. East. CFF de Sorbiers took it over in the first expansion phase, which is currently performing thermal insulation for this first expansion in the south.

To achieve this thermal insulation, the principle chosen by the architects is to remove all thermal bridges in the structure by creating a real outer “shell”. The insulation layer is made using high-performance insulation materials. On the facade of the Rue de la Maternité, thick, greenish colored glass wool panels are glued and attached to the facade.

Panels made of expanded polystyrene (EPS) are glued to the south and east façades and under the upper false ceiling. Once the insulation is complete, a plastered facade coating covers these insulation panels and provides a clean finish.

Thanks to the external thermal insulation, which is carried out by specialists in accordance with the rules of the state of the art, up to 3 classes can be achieved for the diagnosis of energy efficiency. That gain is obviously quantifiable on the energy bill, which will decrease compared to a less recent building. Due to the lower energy consumption, the new building, which will soon be inhabited, will reduce CO2 emissions, reduce energy consumption and thus help protect the environment. The construction takes place in the sense of environmental protection and the reduction of energy costs.